Known as 'Teddy Hall', St Edmund is known for its friendly and sociable reputation (having a compact site and lots of students means you get to know everyone very quickly), and our picturesque front quad is often described as being one of the prettiest in the university. Unsurprisingly, our mascot is a bear – we even have a college teddy (named Julian).

Dinner is provided in hall every night; breakfast and lunch are provided on weekdays, and brunch on weekends. There’s always a vegetarian option at dinner and all kinds of dietary requirements are catered for. The food’s a little more expensive than some (dinner is £4.90) but you get what you pay for – in our case, a three course meal prepared by a chef who previously worked in a Michelin-starred restaurant. We also don’t pay a kitchen surcharge like some colleges do. Formal hall happens twice a week and is totally optional; normal dinners are completely casual affairs. 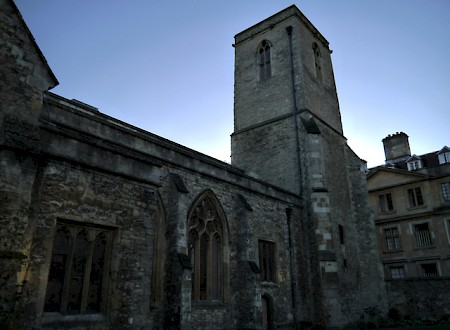 All first years live on the college site. College rooms are spacious and well-furnished; bathrooms are shared (about one between four) and are cleaned daily, while kitchenettes are available on each floor. In second year we live out. Although some people are initially put off by this, most people end up loving the freedom (and house parties) and it’s certainly refreshing to escape the Oxford bubble and fend for yourself.

Teddy Hall has a history of sporting excellence, particularly in rugby, (where the club has competed in the last 3 cuppers finals!), netball and rowing. There is such a wide range of sports teams, so if you prefer the more relaxed approach to sport, there is 3rd team football and weekly Yoga classes. Added to this there is a strong musical community and budding drama and creative writing societies, brought together for example, by the Teddy Hall Musical being produced this year! Those who take part in extra-curricular activities are supported by the college’s Masterclass Fund, which is a grant of up to £1,000 for lessons and materials.

We’re passionate about welfare – our team of student peer supporters are always available if you need to talk. Every week we buy £100 worth of snacks for everyone to eat at “JCR tea” this happens every day in the 5th week of each term alongside events such as massages and bouncy castles in order to stave off ”5th Week Blues”. When you arrive, you are given “college parents” (2nd years!), who are there to help you settle in.

Bops happen twice a term, the in-college ones being huge parties in our dining hall, and balls occur once every two years. Our cosy bar serves pints for as little as £2.10. Special formal dinners are held throughout the year; one of the most popular is Oxmas (Oxford’s early Christmas) which, appropriately, always ends in a rousing rendition of “Teddy Bear’s Picnic”.

I love the friendly atmosphere and sense of community – there are very few times walking across the quad when I don’t meet someone I know.

Living out in second year is a great experience and one which I think is an integral part of Teddy Hall life – it’s an interesting change of pace.

There’s a really active social scene in college. It seems like every other day there’s something new going on, whether that’s film nights, student art exhibitions or late night teas.

Cookies are used to make this website work and to enhance your experience. To learn more about the types of cookies this website uses, see our Cookie Policy. We need your consent to use marketing cookies. Marketing cookies are used to track visitors across websites. The intention is to display ads (via third party services) that are relevant and engaging for individual users. Please select the checkbox below to indicate your consent.