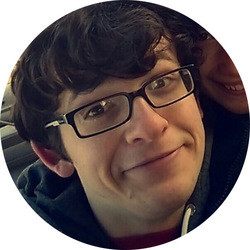 I chose English and French simply because those were the two subjects I enjoyed the most at school, and that enjoyment has never stopped. Understanding literature from two perspectives is what I have found most rewarding; I feel as if I have slowly come to learn why studying literature was a valuable thing to do in the first place! The feeling of mastering a specific writer or topic is unbeatable.

It can, however, be difficult to organize classes, since the two departments tend never to communicate: you have to timetable with foresight and balance. And I’ve always felt as if I’m losing out on the coherence of the English course, since Modern Languages is a little here-and-there in comparison. Literature is done best in English, even if language-learning quickly becomes a secondary concern. Nonetheless, I’d recommend this course to anyone whose aptitude for literature is equal to their linguistic enthusiasm.

For as long as I can remember I have loved reading, and at school English was my favourite subject. I also really enjoyed French, and thought doing a language would not only be fun and interesting but also really employable. So I decided to apply for French and English.

For my second year, I chose to do medieval literature options on both sides of my course. In the later Middle Ages, there is so much overlap as the English and French are constantly fighting, some English authors wrote and translated French, and some French authors wrote and translated English. The two sides of my course have come together and it’s been brilliant and fascinating to see how two cultures overlap and interact, but at the same time strive to mark themselves as unique and individual. Despite the headache of sorting out timetable and the issue of timetable clashes, there’s never been a moment I have regretted studying Joint Schools.

I decided to do the Old Norse literature as my final English paper and I became really interested into Old Norse translations of Medieval French Romance. It’s now become my dissertation topic, and I am working across both faculties on a topic that there is little written about - it’s amazing to be able to work with world leaders, and be taken seriously as a researcher. It’s also extremely exciting to feel like I might even contribute something new to their field!

I chose to study English and Russian at Oxford because I couldn’t bear to give up either subject, and only Oxford offers a joint-honours course with a literary focus on the Russian side. Beginning to study my favourite Russian novels and poems in the original is as exciting as I had hoped, and the freedom to choose texts and periods in English is exhilarating, if overwhelming. Because there is no coordination between departments, my workload fluctuated from term to term, sometimes disconcertingly. But as I got used to working independently and organising myself, I found it easier to balance out my course. Despite its challenges, I couldn’t imagine choosing any other.

English and Modern Languages gives you the opportunity to follow your literary interests, become fluent in a foreign language, and gain a uniquely international perspective on it all. On the English side of first-year, you learn how to tackle everything from medieval poetry to contemporary advertising through minute linguistic analysis, get a crash course in literary theory, and zero-in on Anglo-Saxon, Victorian, or Modern literature. In your chosen modern language, you focus on deepening grammatical knowledge and becoming comfortable with a range of literary genres and periods. From second-year onward, your foreign language literature work is no different from your English work in depth and breadth of choice. You continue foreign language conversation and translation classes too. After taking a year abroad in your third year, you can specialise even further, concentrating on individual authors and topics, and, if you choose, combine your two subjects in a final dissertation.

I read Harry Potter in French - it sounds really simple but actually got me thinking about some really complex translating issues (such as how is it possibile to translate a made up word? Can puns be moved between languages?). These are questions I still consider today when looking comparatively between subjects.

Just read: anything and everything. It doesn't have to be stunningly academic or brilliant: I also talked about 'The Hunger Games' - it's much more important to have an opinion and be critical than to read lots and sort of flounder/drown.

I also found listening to FranceInter (radio online) to be useful and full of topical debates. Sky Arts has some great French dramas and films too!

The main help for me was The Guardian newspaper's series on the 100 best novels - I think this is arranged in chronological order and the comments section introduced me to authors I had been unfamiliar with - such as Edith Wharton and DH Lawrence - who I went on to talk about in my personal statement and interviews.

During my French interview I was asked "Is this text written or spoken?", to which I responded "Written - this is a sheet of paper." There was a moment of silence, during which I think the interviewers thought I was joking, and in which I panicked thinking at that point my chances were over... I was incredibly nervous (I have social anxiety) so speaking in French during my interview was really hard and I made lots of mistakes. However, the tutor did a really good job at putting me at ease. We started off talking about my written work (it was on 'Kiffe Kiffe Demain' and immigration - fairly standard A Level stuff) then moved onto more general questions about identity and immigration. It was tough, but not unmanageable and I found I was able to really stretch my abilities. It wasn't perfect, but I never gave up (even when gesticulating and describing sheep as "white and black soft things" because I'd forgotten the word...)

In both interviews, questions started on literature I had read and topics I had studied, then moved more generally with questions like:

Applicants that might be offered a place are invited for interview in December. See English and Modern Languages interviews for more information.

Course length: 4 years (with a year abroad)
Students per year: 20

You might also find it helpful to hear from students studying English, Modern Languages or History of Art (or even consider applying for those courses!).